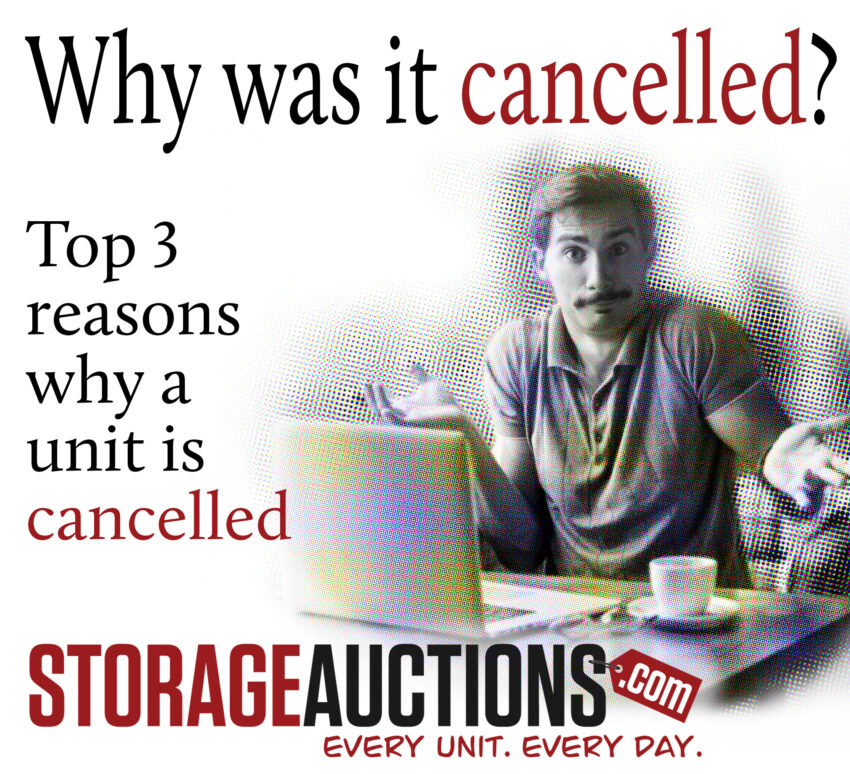 The Top 3 Reasons why a Unit is Cancelled

You’re bidding on a unit – the auction has a few days left and you are winning. At this point, you’re starting to get a little excited about the upcoming closing of the auction. However, you check your messages, and you receive a message:

“Unit XYZ has been cancelled.”

At this point, you may be confused. Cancelled? What does that even mean in relation to an online self-storage auction? Well, that’s why we’re here, to demystify the concept of a unit cancellation and to give some background on what and why it would be cancelled.

First, let’s start with what “cancelled,” even means. A cancelled unit means that a particular unit is no longer available to be bid on and has been removed by the storage facility where that unit is being auctioned at. In terms of this, the unit has been removed from auction. Now, this sparks the question of “why would the unit be cancelled or removed?”

We have simplified why a unit would be removed from auction for three reasons, which we will explain below, helping break down the confusion around cancellations.

The Tenant Has Paid

The number one reason a unit would be removed from an auction or cancelled is simple: the tenant who originally owned that unit has paid the self-storage facility the balance owed. Ultimately, lien auctions are held to collect back the rent owed by a tenant in default. The completion of a self-storage auction is related directly to the tenant paying or not paying back what is owed to the facility.

If a tenant pays back the rent that is due, the unit must be cancelled. A unit up for auction can legally be cancelled and returned to the tenant at any time before the winner of the unit arrives at the self-storage facility to collect the contents of the unit. For a self-storage facility, this is the ideal scenario – the rent is collected in full, and the auction no longer needs to be held to make up for lost revenue.

There is an Error

The second most common reason where a unit would be cancelled would be if for some reason, there was an error or mistake in the lien process. The lien process is put in place to standardize the legality of lien auctions, and thus, must be followed to the “t.”

To stay true to the law, if there is any error in the process, the auction must be cancelled. In the event of this situation, you can normally expect the auction to be re-listed shortly after, this time, adhering to the legal process!

If an auction or unit was removed from the website, ultimately, there could have been a mistake along the way, not in relation to the legal process. For instance, a unit could be vandalized, rummaged through, or broken into while the auction is in progress. Similarly, the incorrect images could have been uploaded to the incorrect unit. You wouldn’t want to win a unit that isn’t what was reflected correctly in the images provided.

Ultimately, you always have the choice to reach out to the facility if you have any questions about the units on the website if you’re curious about specifics.

StorageAuctions.com is here for our bidders. If you ever have any other questions about cancellations or just about anything else on your mind, we have customer service representatives on staff, ready to take your calls at 866-944-8530.